Money and Happiness: The Real Relationship

This is the second part of two guest posts by David Krueger, M.D. David is a writer, an Executive Mentor Coach and a former Psychoanalyst. He lives in Houston. Find out more at David's website, and Facebook Page. You can also follow him on Twitter and connect in LinkedIn.

Money can solve many problems, or at least make them easier. A very successful businessman once told me, “I’ve never seen a problem that money has made worse.” With the exception of drug addiction, he probably has a point.
But then we overreach, to make money address more than it should. It gets pressed into service because it’s a commonly accepted social and personal resource—it makes us feel self-sufficient.

The idea that more money will bring more happiness is one of the most pervasive and persistent money themes in modern culture. Is there any truth to it?

Our relationship with money assumes that we know what money can do for us—that we know what we’re giving and getting for money. Some things do work this way: the more you pay, the more you get, such as a car, hotel, or house. But not so with other things such as happiness, love, and authenticity—which may at times even have an inverse relationship. And we can never get enough of what we don’t need.

Research suggests that money, like Prozac, doesn’t make us happy. Both, however, can prevent certain forms of unhappiness. Money, for example, allows us to afford better medical care, safety, neighborhoods, gadgets, and at times, a better mood.

Dr. Daniel Gilbert, a Harvard psychologist, has demonstrated that both greater wealth and actual purchases have little permanent impact on happiness. His research shows those events we expect to make us happy often prove less exciting than we anticipated. The increased happiness and pleasure that we predict might come from a raise in salary, for example, or a new gadget, typically fall short of our expectations. University of Illinois psychologist Dr. David Myers found that after an initial excitement with a burst of good fortune, such as inheritance, lottery, or job advance, people revert to their initial set point of happiness or gloom.

Consistent evidence shows that experiences (such as vacations, theater, or dinner) make people happier than material possessions they spent money for. One reason is that the process is more social: when we spent money on dinner with a loved one or a vacation with family, we create an entire experience. When we spend for a possession, we quickly grow accustomed to it and it loses the pleasure, simply because a different neurochemical system takes over once the purchase is made. This drop in dopamine after we buy accounts for buyer’s remorse. (The same drop before we buy is called coming to our senses).

Money is the legal tender of desires. We use it to measure success as well as to try to buy happiness. We use money to communicate, to carry messages. Of course, money doesn’t promise anything since it can’t speak—it doesn’t even know who owns it any more than war bonds knew about the war. We project our desire onto it like a Rorschach inkblot.

When we compare our inside to someone else’s outside, we think money can bridge the difference. Money is a ceaselessly renewable promissory note for possibility. But happiness is not a goal or reward. It’s a consequence.

We need money in order to know what can’t be purchased.

David Krueger, M.D. is an Executive Mentor Coach, and CEO of MentorPath, an executive coaching, publishing, and wellness firm. His approach integrates the insights of psychology, neuroscience, and professional coaching to help professionals and executives write the next chapter of their business stories.

Author of 17 trade and professional books on success, wellness, money, and self-development, and 75 scientific papers and book chapters, his coaching and writing focus on the art and science of success strategies: mind over matters.

Need ongoing encouragement to help you be the man you want to be? Be sure to sign up for regular blog updates. 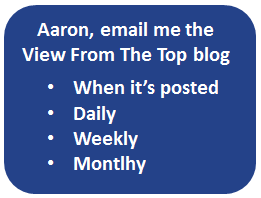